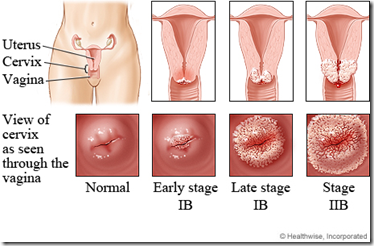 Pain in the back when lumbosacral plexus is involved (neurologic involvement). Gross oedema of the legs also might occur, which is indicative of vascular & lymphatic stasis.

A 54-year-old woman notes a 6-month history of progressive vaginal discharge with an odor. She also has noted vaginal spotting after intercourse. She had gone through menopause 2 years earlier and took an oral contraceptive for 10 years. She has smoked one pack of cigarettes per day for 20 years. She denies a cough or dyspnea. She complains of right back pain and right leg swelling. The speculum examination shows a 4-cm irregular fungating mass arising from the cervix.

· What is the most likely diagnosis?

· What is the next step?

· What is the likely pathophysiology for this condition?

Summary: A 54-year-old postmenopausal woman has a 6-month history of an odiferous vaginal discharge and postcoital spotting. She has smoked one pack of cigarettes per day for 20 years. She complains also of right back pain and right leg swelling. The speculum examination shows a 4-cm irregular fungating mass arising from the cervix.

· Next step: Biopsy of the lesion to confirm the diagnosis, followed by staging to assess the extent of the disease.

This patient most likely has cervical cancer. Indications leading the clinician to the diagnosis in this case include the patient’s risk factors and presenting symptoms. Her risk factors for cervical cancer include age, a history of oral contraceptive use, and a history of smoking. The presenting symptoms of malodorous vaginal discharge and postcoital bleeding are characteristic of cervical cancer. The history should guide the clinician to examine the cervix. In this case, a grossly visible lesion was seen on the cervix during speculum examination. The next step in management is to biopsy the lesion for a definitive diagnosis.

Approach to Cervical Dysplasia and Cancer

Cervical intraepithelial neoplasia (CIN): Dysplastic growth and development of the epithelial cells of the cervix. Lesions may be defined by mild, moderate, or severe, or CIN I, CIN II, or CIN III (see Figure 9-1).

Human papillomavirus (HPV): A double-stranded DNA virus associated with condyloma, cervical intraepithelial lesions, and cervical cancer. Cellular changes seen in HPV infection include an expanded parabasal cell layer and koilocytes but normal maturation and mitoses. There are over 70 types of HPV, which have varying oncogenic capacities. High-risk HPV types are those most often associated with high-grade lesions and invasive cancer. These types include 16,18, 31, 39, 45, 56, 58, and 68.

Cervical cancer is the third most common cancer of the female lower reproductive system. More than 80 percent of cervical dysplasias and more than 90 percent of cervical cancers are associated with HPV infection. Because HPV is transmitted through sexual contact, many of the risk factors for cervical cancer involve behaviors that increase the risk of all sexually transmitted diseases. These risk factors include early intercourse, many sexual partners, high-risk sexual partners, infection with other sexually transmitted diseases, and immunosuppression by HIV infection. Relative risk factors may include oral contraceptive use, tobacco use, and immunodeficiency. Other possible risk factors are under investigation.

Cervical dysplasia is found most often in females in their twenties, whereas cervical cancers usually become evident in the fifth decade of life. The classic presentation of cervical malignancies includes abnormal bleeding and leukorrhea. The bleeding can range from blood streaking in a discharge or spotting to heavy bright red blood. Foul-smelling purulent leukorrhea is often present. Other symptoms, such as pelvic or leg pain, urinary or fecal material in the vagina, weight loss, and generalized weakness, are suggestive of advanced disease.

The squamocolumnar junction is where the squamous ectocervix abuts the columnar endocervix. Just distal to this junction there is an area of squamous metaplasia that is influenced by factors such menarche, pregnancy, local hormonal influences, infection, and trauma. As columnar epithelium is replaced by squamous cells, a new squamocolumnar junction is formed. The area between the old junction and the new junction is called the transformation zone. It is in this transformation zone that most cervical cancers arise.

Cervical cancer begins with infection of cervical epithelium by human papillomavirus. Most infections resolve spontaneously without progression to cancer. This suggests that viral infection alone is not responsible for cervical cancer and that other, undefined factors are involved in the pathogenesis. Additionally, there are many types of HPV that vary in oncogenic potential, with subtypes 16 and 18 being found most commonly in cervical caner.

Progression to dysplasia will occur if the viral genome is integrated into the nucleus of the cell under the influence of other factors that contribute to a favorable environment. Distinct cellular changes will occur, representing malignant transformation to low-grade cervical intraepithelial neoplasia (CIN I). A typical lesion will appear slightly raised or thickened with koilocytes in the upper and middle epithelial layers. Koilocytes are cells that have undergone cellular changes because of the presence of a virus. These cells are pleomorphic, hyperchromic, and multinucleated and have perinuclear halos. There are few if any mitotic figures and no atypical mitotic figures in CIN I, usually involving the lower third of the epithelium.

These low-grade CIN I lesions may regress spontaneously without treatment but may progress to higher-grade lesions. When atypical cells spread to between the lower 1/3 and 2/3 of the epithelium or the majority of the cells of the keratinizing layers, the lesion is defined as CIN II. These lesions demonstrate some areas of maturation but have areas of immature atypical koilocytic cells with a decreased nuclear to cytoplasmic ratio and increased numbers of mitotic figures (see Figure 9-2). Progression to CIN III involves the upper 1/3 of the epithelium by atypical cells with loss of maturation, an increase in hyperchromasia, and more mitotic figures with atypical mitoses. As the lesion progresses to squamous carcinoma in situ, the dysplastic cells may lose their cell walls and form syncytial-like groups. Many small round nuclei with scant cytoplasm can be seen. The majority of cells are atypical and are more hyperchromatic with coarse chromatin, a higher degree of pleomorphism, and increased atypical mitoses. Carcinoma in situ becomes invasive squamous cell carcinoma when atypical cells invade the basement membrane. Invasive carcinoma has wide variations of irregularly shaped cells and may have keratin pearls. There may also be evidence of necrosis, hemorrhage, and inflammatory cells.

The progression from CIN to cervical cancer is a slow process that usually occurs over several years. This allows many opportunities for screening before advanced-stage disease is evident. Most cases of cervical dysplasia are asymptomatic, and the diagnosis is made when a Pap smear reveals abnormal cytology. Good screening of asymptomatic patients, including a thorough history and physical, and routine Pap smears have led to a decreased incidence of cervical cancer. The role of the Pap smear is paramount in early detection of cervical dysplasia to afford timely treatment and avoid progression to invasive cervical cancer. Even after the development of cervical c
ancer, a Pap smear has an important role in detection because diagnosis early in the disease process may offer a better prognosis. Treatment of early cervical cancer offers a 95 percent cure rate, whereas more advanced stages often lead to death in more than a third of cases. This underscores the importance of diligent efforts by the physician in counseling patients to receive an annual Pap smear.

[9.1] A 24-year-old woman is noted to have atypical cells on a Pap smear. Which of the following features most likely would indicate the need for further investigation of cervical biopsy?

A. HPV viral subtype revealing that type 16 is present

B. Presence of diabetes mellitus

[9.2] A 32-year-old woman is noted to have a 2-cm fungating lesion of the cervix. Which of the following is the best next step?

B. Biopsy of the lesion

C. Pap smear of the cervix

[9.3] A hysterectomy specimen is performed, and the cervix is examined by the pathologist. The pathologist determines that the patient has CIN I. Which of the following is the most likely histologic finding?

A. Cells with enlarged nuclei and loss of polarity involving the upper third of the epithelium

B. Cells with enlarged nuclei involving the middle third of the epithelium

C. Cells with enlarged nuclei and loss of polarity involving the lower third of the epithelium

D. Cells with large nuclei and mitotic figures below the basement membrane but not more than 3 mm

[9.1] A. In the Besthesda system of Papanicolau cytology reporting, findings can include atypical squamous cells of uncertain significance (ASCUS), low-grade intraepithelial neoplasia, high-grade intraepithelial neoplasia, and invasive cancer. ASCUS does not necessarily translate into a serious condition, and some practitioners will repeat the Pap smear in 3 to 6 months. However, if a high-risk viral subtype such as 16 or 18 is detected, colposcopic examination with directed cervical biopsies is recommended to assess the extent of disease.

[9.2] B. The Pap smear is for cytologic analysis of a normal-appearing cervix and is used as a screening test. An abnormal cervix (i.e., lesion) should be biopsied.

[9.3] C. CIN I entails mild dysplasia that involves the lower third of the epithelium. Because the basal cells (those closest to the basement membrane) are the actively dividing cells, they are the ones affected by HPV.

· Cervical intraepithelial neopalsia is a precursor to cervical cancer.

· The vast majority of cases of cervical dyspasia and cancer are associated with human papillomavirus, particularly subtypes 16 and 18.

· The best method for analyzing a visible cervical lesion is biopsy, not a Pap smear.

· The Pap smear has decreased the incidence of cervical cancer in the United States dramatically.