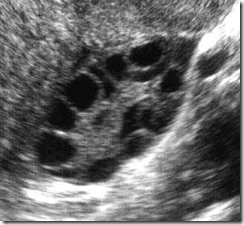 The principal features are

Polycystic ovaries develop when the ovaries are stimulated to produce excessive amounts of male hormones (androgens), particularly testosterone, either through the release of excessive luteinizing hormone (LH) by the anterior pituitary gland or through high levels of insulin in the blood (hyperinsulinaemia) in women whose ovaries are sensitive to this stimulus.

The syndrome acquired its most widely used name due to the common sign on ultrasound examination of multiple (poly) ovarian cysts. These "cysts" are actually immature follicles, not cysts ("polyfollicular ovary syndrome" would have been a more accurate name). The follicles have developed from primordial follicles, but the development has stopped ("arrested") at an early antral stage due to the disturbed ovarian function. The follicles may be oriented along the ovarian periphery, appearing as a ‘string of pearls’ on ultrasound examination. The condition was first described in 1935 by Dr. Stein and Dr. Leventhal, hence its original name of Stein-Leventhal syndrome.

PCOS is characterized by a complex set of symptoms, and the cause cannot be determined for all patients. However, research to date suggests that insulin resistance could be a leading cause. PCOS may also have a genetic predisposition, and further research into this possibility is taking place. No specific gene has been identified, and it is thought that many genes could contribute to the development of PCOS.

A majority of patients with PCOS have insulin resistance and/or are obese. Their elevated insulin levels contribute to or cause the abnormalities seen in the hypothalamic-pituitary-ovarian axis that lead to PCOS.

Adipose tissue possesses aromatase, an enzyme that converts androstenedione to estrone and testosterone to estradiol. The excess of adipose tissue in obese patients creates the paradox of having both excess androgens (which are responsible for hirsutism and virilization) and estrogens (which inhibits FSH via negative feedback).

PCOS may be associated with chronic inflammation, with several investigators correlating inflammatory mediators with anovulation and other PCOS symptoms.[19][20]

One study in the United Kingdom concluded that the risk of PCOS development was shown to be higher in lesbian women than in heterosexuals.[21][22] It should be noted however that all the participants in this study were referred after infertility was discovered or highly suspected and conclusion made is purely conjecture. Until further studies have been conducted and the research collaborated there is no assumption that female homosexuality will increase the occurrence of PCOS.

Medical treatment of PCOS is tailored to the patient’s goals. Broadly, these may be considered under four categories:

Keywords 43 y/o lady Outpatient department pain, swelling and limitation of movement in her right knee awakened from sleep at night due to severe pain paroxysmal nocturnal Aggravating factor high protein meal – red meat, liver, kidney Extending to her ankle and foot Pic: swelling of right foot In the past weeks frequency and severity…