Disorders of the uterus & ovary

Disorders of the uterus 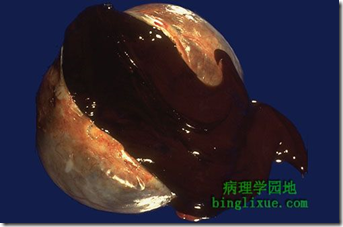 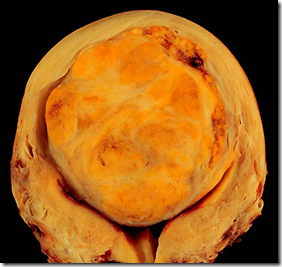 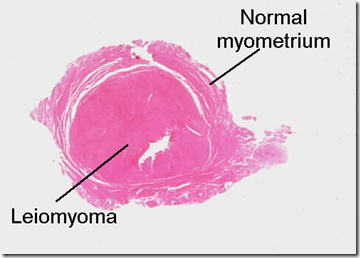 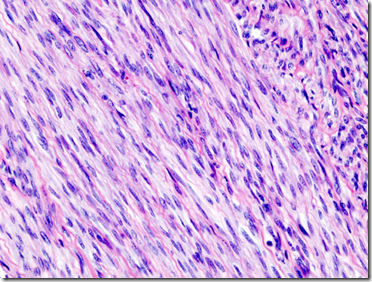 Disorders of the ovary 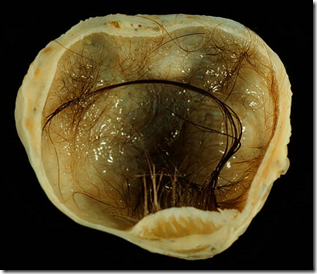 A 21-year-old nulliparous woman complains of lower abdominal "heaviness." She takes an oral contraceptive and is in a monogamous relationship. On examination, she has a normal-sized, nontender uterus, and a 9-cm right adnexal mass is palpated. Her pregnancy test is negative. On sonography, the mass appears cystic and solid.

· What is the most likely diagnosis?

· What are some of the histologic findings expected in this mass?

Summary: A 21-year-old nulliparous woman has a 9-cm right adnexal mass that on sonography appears cystic and solid.

· Most likely diagnosis: Benign cystic teratoma of the ovary.

· Expected histologic findings in this mass: Any tissue may be found, but the most common are sebum, skin, hair, teeth, thyroid, and neurologic tissues.

This young woman has an ovarian mass that on ultrasound has cystic and solid components, a classic presentation of a benign cystic teratoma (dermoid cyst) of the ovary. Although benign cystic teratomas are often asymptomatic, larger dermoids (as in this case) can present with pelvic pain, pressure, fullness, or dyspareunia. The patient’s pregnancy test was reported as negative; however, in rare cases, degenerating ectopic pregnancies can be missed with urine human chorionic gonadotropin (hCG) assays because of the low sensitivity of urine pregnancy tests in the presence of very low (<25 mIU/mL) serum hCG levels. The fact that the patient is engaged in a monogamous relationship should decrease the risks of her contracting gonorrhea or Chlamydia, hence decreasing the possibility of pelvic inflammatory disease and tuboovarian abscess (TOA). The patient also gives a history of oral contraceptive (OC) use, which also serves to decrease the risk of pelvic inflammatory disease and/or TOA. Oral contraceptives also greatly decrease the likelihood of the mass being a physiologic ovarian mass (follicular cyst, hemorrhagic corpus luteum cyst, etc.). The ultrasound shows a complex (both cystic and solid) ovarian mass, which also is not consistent with an abscess or a physiologic ovarian or paraovarian cyst.

Although some disagreement exists over the timing and indications for surgery in complex masses under 6 cm or simple cysts of any size, a 9-cm complex ovarian mass almost always needs to be explored surgically. This is due primarily to the small but not insignificant risk of malignancy. Upon confirmation of benign intraoperative findings, efforts should be directed at salvaging all normal tissue from the affected ovary and removing only that tissue which has undergone neoplastic degeneration.

Endometrioma: A large (6- to 8-cm) loculated collection of endometrial tissue that can develop in the pelvis in females with endometriosis. As this tissue degenerates, it turns brownish in color and is known as a chocolate cyst.

Struma ovarii: A benign teratoma in which functional thyroid tissue is the predominant histologic finding. Approximately 2 to 3 percent of teratomas are classified as struma ovarii. Thyrotoxicosis is clinically apparent in 5 percent of these cases.

Ovarian torsion: A condition in which the ovary twists on its attachment to the infundibulopelvic ligament, thus interrupting ovarian blood supply. This usually is seen in conjunction with pathologic enlargement of the ovary and can be dynamic (intermittent) in nature or complete; the latter results in infarction and necrosis of the affected ovary.

Benign cystic teratomas arise from a single germ cell in the ovary and have a normal female karyotype (46,XX). Because of the pleuripotent nature of germ cells, teratomas can differentiate into tissues derived from all three embryologic cell lines (endoderm, ectoderm, and mesoderm). Thus, a "mature" teratoma often contains skin, fat, sebaceous glands, sweat glands, hair, smooth and striated muscle, cartilage, bone, teeth, neural tissue, and gastrointestinal tissue (see Figure 10-1). Functional thyroid tissue is found in approximately 12 percent of benign cystic teratomas, and rarely this tissue will proliferate into the predominant cellular element in the teratoma. This unique teratoma hence is referred to as struma ovarii and will secrete enough functional thyroid hormone to cause acute thyrotoxicosis in approximately 5 percent of cases.

Benign cystic teratomas are usually asymptomatic and are found most commonly during routine gynecologic screening or incidentally during unassociated surgical or radiographic procedures. Larger teratomas give rise to acute adnexal torsion in approximately 11 percent of cases. The increased risk of torsion with teratomas compared with other causes of ovarian enlargement is thought to be due to fat content, allowing the teratoma to "float" in the abdominal cavity instead of lodging against other structures. Other significant complications include secondary infection and acute hemorrhage with the potential for septic and/or hypovolemic shock. Rupture or perforation is seen in less than 5 percent of cases and occurs more frequently in association with pregnancy. When acute rupture occurs, spillage of the contents of the teratoma into the abdominal cavity often precipitates a surgical emergency, whereas more chronic leakage of contents can produce a severe chemical peritonitis that also requires surgical intervention. Malignant degeneration occurs in less than 2 percent of all recognized teratomas.

Stromal tumors of the ovary are often functional, secreting estrogen (granulosa-theca cell tumors) or androgens (Sertoli-Leydig cell tumors). These neoplasms can present as precocious puberty, postmenopausal bleeding, or hirsutism. They are usually solid tumors that are slow growing and rarely metastasize early. Surgery is the best treatment for these tumors.

[10.1] A 58-year-old woman is noted to have bilateral adnexal masses on physical examination. Which of the following is most suggestive of these adnexal masses being malignant?

A. CT imaging revealing that they are primarily cystic

B. Elevation of the serum alkyline phosphatase level

D. The presence of ascites

E. The presence of low-grade fever

[10.2] A 25-year-old woman is noted to have a solid and cystic right ovarian mass measuring 10 cm on ultrasound. Which of the following is the most likely histologic subtype
?

[10.3] A 4-year-old girl is noted to have breast enlargement and vaginal bleeding. On physical examination, she is noted to have a 9-cm pelvic mass. Which of the following is the most likely etiology?

[10.4] A 44-year-old woman undergoes an exploratory lapartomy for suspected ovarian cancer. Upon removal of the right ovary, a frozen section reveals "signet ring" cells. Which of the following is the most likely etiology?

[10.1] D. The presence of ascites and ovarian masses is strongly associated with ovarian cancer. Other features of malignancy include solid ovarian masses, bilaterality, and lymphadenopathy.

[10.2] D. The benign cystic teratoma or dermoid cyst is the most common type of ovarian tumor in females younger than age 30 years. Dermoid cysts usually have solid and cystic components.

[10.3] D. This young girl has signs of precocious puberty. Thus, the adnexal mass is likely to be an estrogen-secreting granulosa-theca cell tumor. These low-grade malignancies are slow-growing so-called stromal cell tumors. The androgen-secreting tumors are usually Sertoli-Leydig cell tumors and may cause virilism.

[10.4] B. Signet ring cells suggest a Krukenberg tumor, usually metastatic from the gastrointestinal tract (stomach, colon) or breast. The mucin that fills the cell pushes the nucleus to the periphery of the cell, leading to the appearance of a signet ring.

· Benign cystic teratomas are the most common nonphysiologic ovarian tumor in females under age 35.

· Ten to 15 percent of all teratomas are bilateral.

· The most common ovarian cancers are epithelial in origin and usually occur in postmenopausal women. Surgical excision followed by combination chemotherapy is the best treatment.

· Ovarian cancer is associated with ascites.

· Metastatic tumors to the ovary may have a "signet ring" appearance on microscopy and are called Krukenberg tumors.